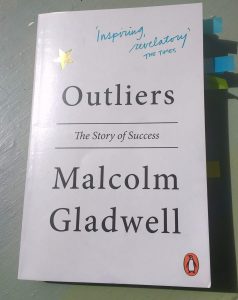 The review on the cover of this page told me to expect a book that was ‘inspiring, revelatory.’ So, I opened the book for the May Business BookCLUB with anticipation.

Did it live up to this promise? In my opinion, only partly. It was revelatory, but as for inspiring I found it quite the opposite. It showed that the people who are outliers – those who excel – require a whole range of things to align for them to become successful and often, if you don’t have those at a young age you are unlikely to be an outlier.

These include when you were born (either within the year to become successful at sport or which decade to maximise opportunities); your parents and family background; the schools you go to; even the country in which you are born. These cogs in the wheels all need to be in place for people to have the opportunity.

Of course individuals need to take that opportunity and follow something with passion so that they build up the 10,000 hours of practice to become an expert – hence The Beatles with their playing in Hamburg and Bill Gates with his hours on a computer as a teenager. But equally Gladwell cited a person called Chris Langan who was a genius, but he has never had any work published and never completed a degree. Why? Because his family background did not provide him with the skills to navigate school and university successfully.

All this was very interesting – showing that the “self-made men” are never just that – they are the result of a number of different aspects of their life and culture. But it concerns me greatly that many people are never going to achieve their potential because of their background. I did a little bit of my own research into British Olympic medalists – at the London Olympics in 2012, 50% of all British medal-winners went to private school. Only 7% of the population do. Clearly this does not reflect the talent pool, rather it shows where the people are who get the opportunities.

The best bit of the book for me was the stories of where programmes have worked to get around these inequalities. With early intervention children from the poorest background can most certainly achieve well academically. Given the right training an airline with a bad safety reputation can turn itself round. The book showed that given the right opportunity anyone can be a high achiever, but for us all to thrive there needs to be an effort to level the playing field.

I really enjoyed reading this book – I loved the illustrative stories and examples, particularly Malcolm Gladwell’s own story – which could be described as inspirational. Just don’t expect to be inspired to change your life by reading this book.

If you would like to join Ros Jones’ Business BookCLUB it meets virtually on the last Wednesday of every month. You can read more here